It’s Chinese New Year and for Chinese Singaporeans celebrating the festival, it’s a time to engage in practices which are ‘auspicious’, whether it is exchanging oranges, cooking a full pot of rice or eating pineapples and fish. We decided to do something fun and did a small research about how auspicious (or perhaps superstitious for some) the Singapore landscape is. Turns out, there is a whole fengshui industry catering to everyone who wants a bit of extra good luck, from tycoons building their next multi-billion dollar development to small business owners choosing a new office or shopfront location (check out this online resource where new residential developments are evaluated from a fengshui perspective). Whether for living, working or playing, it’s all about location, location location.

While we are no fengshui masters here at Accommodate, we did pick up some basic concepts which would be useful in understanding the examples of fengshui at work which we have picked.

There are so many aspects of fengshui to consider, and can be understood at different scales. Landform fengshui refers to the geographical location of the building, e.g. whether it’s on a hill, surrounding by green or its position (north, south etc.) in a landmass. The architecture of the building itself will also lend itself to fengshui principles, with different shapes positioned at different angles corresponding to different shapes or formations or creating different levels of positive and negative forces known as ‘qi’. Now that we know these basic ideas surrounding fengshui, let’s dive into so fascinating examples of fengshui in Singapore!

The Carp in the Financial District

The banking industry in Hong Kong and Singapore are well-known for its inclination towards geomancy. Most buildings are located near the Singapore River region, which is referred to as the “carp”. Since there is a chinese saying which refers to the prosperity for the fisherman who catches the carp, the area is said to be extremely favourable.

A notable building located in the area is the OCBC Tower, which resembles the chinese character for shell “貝” to reference olden days currency. Many buildings in the financial district also have octagonal bases, so as to resemble the ‘bagua’ or coins to symbolise money. Some examples include One Raffles Place and UOB Plaza 2.

Given that there are so many skyscrapers in Singapore, the building of one skyscraper also needs to be in consideration with others from a fengshui perspective. In some cases they even compete with each other. There is a theory that when OUB built a 280 metres tower in 1980 (now it is the One Raffles Place tower), it was built with sharp features which were said to be masculine and ‘yang’, thereby overcoming the energy of the UOB Plaza 2, which was just 162 metres. This was said to have led to the prosperity of OUB over UOB, but the situation was supposedly reversed when the latter built the UOB Plaza One in 1992, which was equally tall at 280 metres. It is also said that together, Plaza One and Plaza Two form a twin-tower formation which has feminine or  ‘yin’ energy, which counteracted the masculinity of the OUB building. UOB ended up acquiring OUB in 2001.

Another interesting example would be another I.M. Pei building, the Gateway. It is also known as the ‘cardboard’ building because it looks 2D when viewed from certain angles. This 2D effect is derived from the sharp trapezoid design, and is said to have led to extremely bad fengshui for anything surrounding it. It is thus argued that this is why there is such a big piece of undeveloped land around it.

Our Reservoirs as “Heavenly Lakes”

Not only are our reservoirs extremely important as one of our four national taps, they may play a geomancy role as well according to some fengshui theorists. Water has always been associated with wealth (”水為財“) and there is also this idea of ‘heavenly lakes’. However, it is not just any body of water which can be a heavenly lake. To understand the formation one will have to zoom out to Singapore’s position in the region. Singapore is a flat island surrounded by hills of Malaysia and Indonesia, thus forming a chinese gold nugget known as an ingot. This formation is known as “Treasure in the Golden Basin”, and three reservoirs in the center of Singapore – namely the Upper Seletar Reservoir and and Macritchie Reservoir and Upper and Lower Peirce Reservoir which are part of the Singapore Central Catchment Nature Reserve – is said to be collecting the wealth for the ingot.

Turtle or Pearl ? The Sports Hub

The new Sports Hub has a very interesting and distinctive architecture which has captured the imagination of many Singaporeans. Some say it looks like a rice cooker, others may think it looks like a helmet. Even fengshui theorists are quite split on what the architecture is supposed to represent. One has theorized that it looks like a tortoise shell, thereby guranteeing its success for 100 years given how long turtles live. This is however challenged by the fact that the sports hub has a retractable roof (And turtle’s shells probably don’t have the same function). An alternative theory then, is that it is like an oyster shell which can open and close, thereby symbolizing a pearl, which is also very auspicious.

The three buildings designed by famed Chinese-American architect I.M. Pei is said to represent a character from his name. What a way to leave one’s signature on the urban landscape if this was indeed intentional! Check out this article for the full theory. 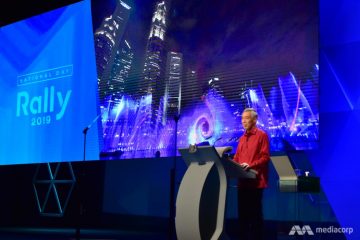